The Heading and Subheading fields work as simple text boxes. Type in the text and it displays at the top of the block selected. 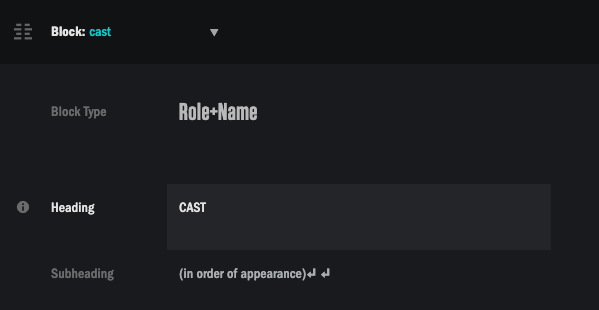 Hit return/enter to add space between a Heading or Subheading and the credits block. The second and subsequent returns will display as line space(s).

Heading and Subheading in Render

A note on block names

Each Heading and Subheading is associated with the specific credits block it's added to. If a block_name is changed, you will need to re-add the Heading or Subheading.

Each block_name in the Credits sheet is a label for that group of credits. These block_names won't appear in the actual credits scroll; they're not Headings or Subheadings.

In the above example, the Selected Block is "cast". "cast" is the block_name, and the Heading "CAST" and Subheading "(in order of appearance)" are added to the "cast" block.