What are Cards, and why do I need them?

"Cards" are credits displayed as individual screens instead of a long, continuous scroll. Typically you will either cut from one card to the next or use fades to dip to black between each card.

How can I use cards with Endcrawl?

You can use cards in a variety of ways! The most common use cases are:

How can I get a cards project?

Use the Add a New Project page in Endcrawl.

I have a scroll project, but now my director wants all cards. Can we do that?

Yes, we can! The support team can easily convert your scroll project to a cards project. (Or the other way around.) Please reach out.

How can I dial in the timing of my cards? Does Endcrawl do the math for me? What if the first card needs to be exactly 3 seconds? And what about fades?

Endcrawl can do all that stuff. We wrote a separate article about it here.

How are cards different from scroll projects?

If you're already familiar with Endcrawl, the good news is: cards projects are almost identical to scroll projects. You'll have all of the same font, layout, and render controls.
Cards differ mainly in how you can organize them, and how you can time them out. We've written this separate article on timing out your cards down to the frame—including fade-ins, fade-outs, and slugs.

What about title safe?

Good question. With scrolling credits, we're only concerned with horizontal title safe. But when it comes to cards, we need to pay attention to vertical title safe as well.
Endcrawl doesn't actively stop you from violating vertical title safe. For example, if you have a long list of thanks, they might spill over the margins like this: 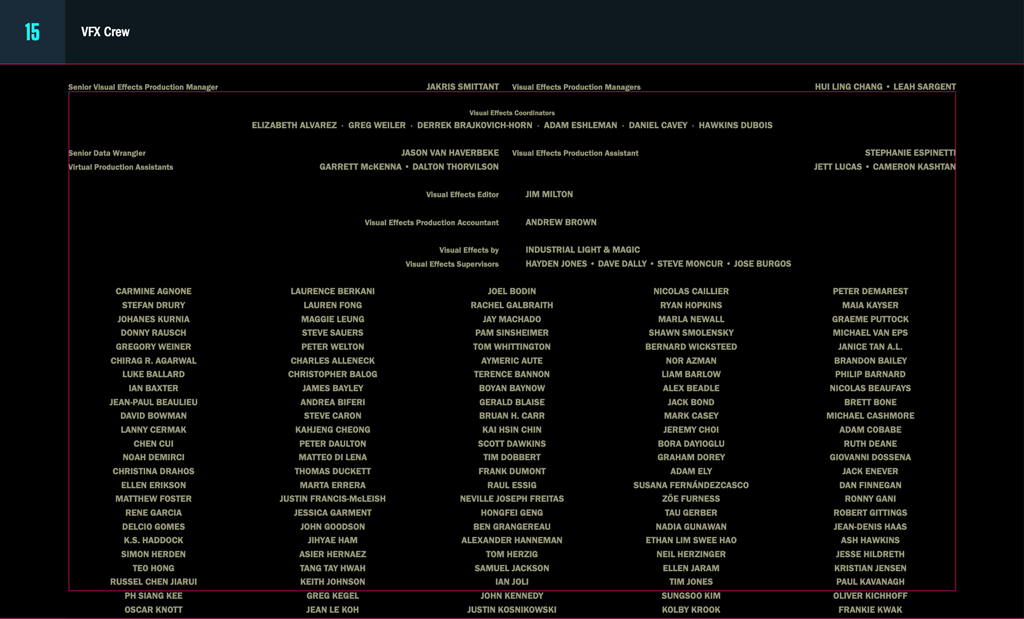 At render time however, Endcrawl's render engine will examine every pixel for violations. If even one pixel strays outside of title safe, your render will fail and you'll get an email explaining what happened, and how to fix it.

Do I need a separate quote and invoice for cards?

No, you don't. Cards are included on our feature film PRO and PLUS tiers.
So if your film project has a mixture of cards and scrolling credits, that will all be under a single invoice.
If you're working on a TV or episodic project, your entire season will be handled under a single invoice.
Did this answer your questions? Thanks for the feedback There was a problem submitting your feedback. Please try again later.